How the Gods Came to Life 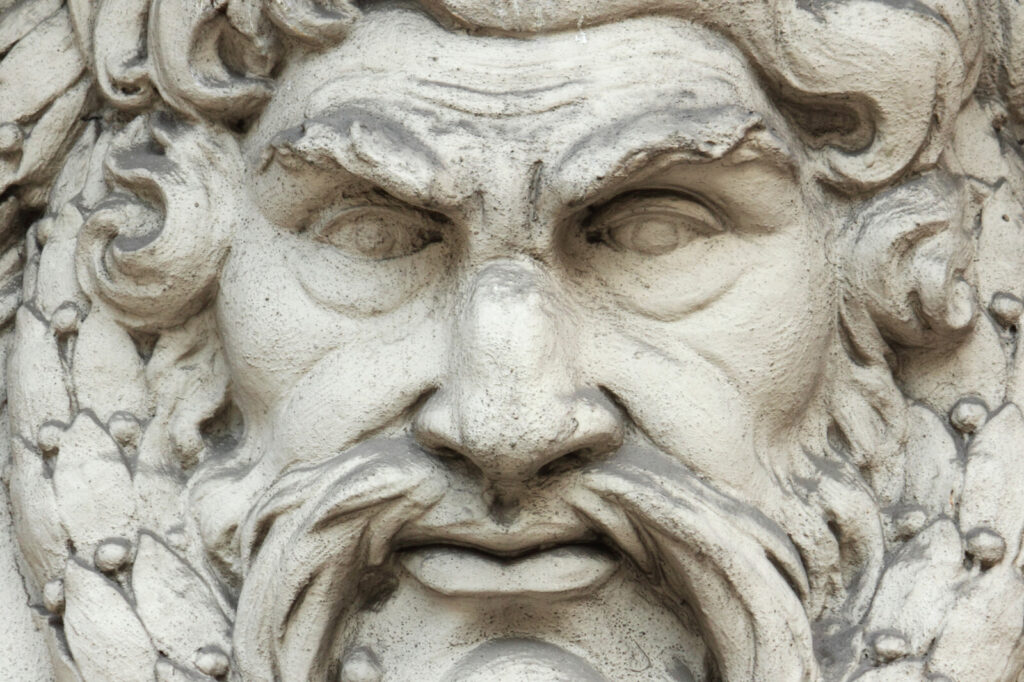 Have you ever gone to a temple and felt the presence of a god?

In ancient Greece, it was possible.

The ancient Greek world was famous for its philosophers and mathematicians. But something that is not discussed much is the fantastic energetics of their temples. The Greeks went to great lengths to invoke their gods’ attributes and energetic qualities in their temples.

How did they do this?

The Five Elements were something familiar to the Greek architects. One Greek philosopher, called Empedocles of Akragas, originated the cosmogonic theory of the four classical elements that make up all the structures in the world, Earth, Water, Fire, and Air. This concept is related to the Hindu vision of the Five Elements. The Hindus even built temples dedicated to each element. These elements were held by the god Shiva Nataraja, who danced and wove the world into being.

Empedocles also considered the Elements as gods. Zeus represented the Air Element, Hera the Earth, Hades was the Fire, and Persephone represented Water. The Fifth Element, Ether, was someone extraordinary, a primordial deity of Greek mythology. He was the son of Erebus (darkness) and Nyx (night). Aether (Ether) was the personification of the superior air that only the gods breathed, vastly different from the air that was breathed by mere mortals.

with human perception and the chakras.

For example, the Earth Element has a grounded feeling and is connected to the first chakra. Some people feel pulled down into the earth by their feet, or others feel more confident. The Water Element is connected to the second chakra, fertility, and creativity. It feels sexy. Fire feels expansive, warm, and active; it is the “fire in the belly” and is related to the third chakra. Air is uplifting, light, felt in the lungs, and works with the fifth chakra.

Then we have the Element of Ether, that rarified air of the gods, also known as soma/prana. Ether begins as a warm expansion of the heart, the fourth chakra. As it travels upwards, it begins to feel like a warm silk scarf opening the energy of the throat. Then, it moves through the upper chakras to connect to the exalted air energy of the gods. This expansion connects one to the world all around and is calm and full of life.

Let’s expand on this thought of feeling the Five Elements with the body.

Because then, you can begin to understand how the Greeks could design a place where their gods came to life. Builders and architects built their temples with the measurements of the Five Elements found in something called in the Master Builder Tradition, the solar mandala. This particular tool is associated with the sun’s annual rhythms and the pattern of the earth in a specific location. For example, the height of the sun’s angles is different in New York City compared to Miami, where the shape of its solar mandala is dissimilar. 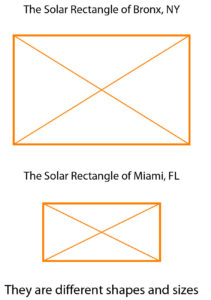 The solar mandala is based on the summer and winter solstice sunrises and sunsets. When these angles are connected to the earth, a rectangular pattern emerges, called a solar rectangle. When you place weight on the four corners, the magic begins. A living structure is created by joining the sun to the earth, one of the big secrets of building a sacred place.

Like the Hindus, the Greeks worked with the solar mandala and the measurements of the Elements they found within it. The statues of their deity used the measurements of the Five Elements. For example, the Air Element was used in the dimensions of Zeus, the sky god. Ether, the sublime air of the gods, could be used to wow people with the opening of their hearts and a deeper spiritual connection.

To really impress people with a god’s presence, the Greek Master Builders would use weight, rhythm, and measurement to build their temples. There were many layers of geometry, and the Greeks used a combination of solar and sacred geometry to enhance their spiritual energies. For example, massive columns were used to set up a rhythm of measure using the Elements. The height, diameter, and the space between each column were all measurements used to invoke the presence of the god through its connection with specific elements. The sheer weight of each column pressing down on the ground provoked a reaction from the earth, spreading information about the column’s size and shape outwards.

Just think about that for a moment.

The temple’s width, length, height and size, and spacing of all of its columns, plus the size of the god’s statue, all had specific measurements relating to particular Elements. Suppose you choose one or two Elements. In that case, the entire complex will radiate this energy outwards, and worshippers could feel the presence of the gods through the chosen Elements.

The statue of Zeus at Cyrene is an interesting example of this. The artisans used the solar rectangle of Cyrene to enclose Zeus. The adds the sun’s life force energy to the statue. Next, they used the Element of Fire for the width, fire is connected to lightning, one of Zeus’s most powerful weapons and symbols. The measurement of the 7th chakra was used for the height of Zeus because he is the all-powerful sky god of the Greek pantheon. 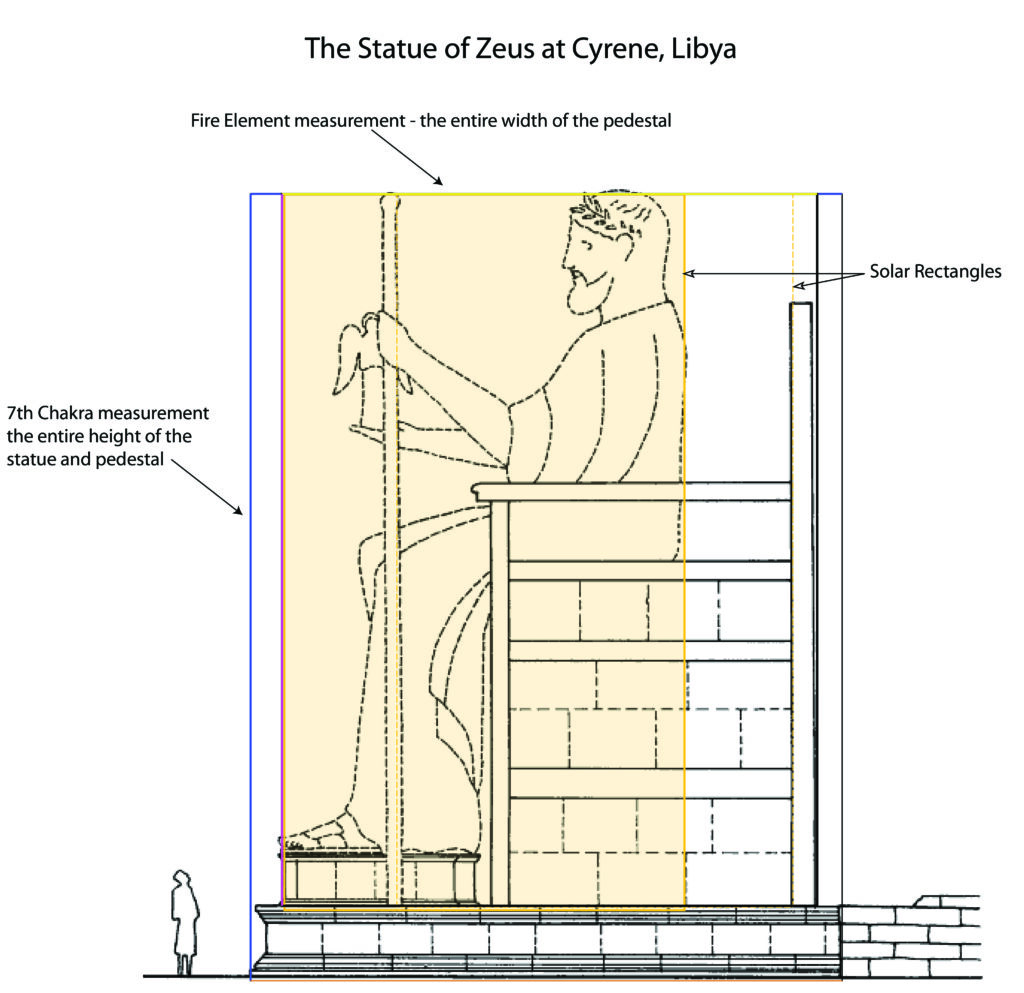 But that is not all.

The enormous amount of energy coming from the temple and the statue of the god could change the energetics of the worshippers’ bodies. It raised their energy and frequency, ensuring a spiritual connection. This experience allowed people to enter into another way of sensing and perceiving the world, one that had a deeper spiritual connection—making these Greek temples a fabulous place to feel the god’s presence.

By Karen Crowley-Susani and Dominique Susani
To learn more about Solar Geometry and the Elements, be sure to check out our book, Secrets of Sacred Geometry; Solar Geometry for Health and LIfe. Click here