The Hidden Story of Building a Church

To build a church, even a simple Romanesque one is a big job.

The role that earth energies play in building and designing a church or cathedral is one of the most important and most unrecognized elements. There are no modern-day discussions about this essential job of the Master Builder. The question of where to place the altar is a crucial one because it sets up the entire vibration and power of a church. This point is what gives the energetic power, flavor, and ambiance to the entire structure. For a church or cathedral to function properly in its role of spirituality, healing, and connection to the divine, it must be built over powerful earth energies.

As you learn about the energies of churches, you will find that many are named according to the energy of the place. For example, Mary churches usually have a resonance with love and the heart chakra or they are related to fertility. St Michel is associated with a special golden vortex. St Peter is associated with cosmic energy that comes from the heavens instead of up from the earth.

The name and the energy of the place are important.

For example, In Brittany, there is a church called St Michel de Braspart. The church was originally built in 1670 on one of the seven sacred Hills (mounds) of Brittany. The mound called Menez Kronan, is named after the Celtic God of Life and was an ancient place of sun worship. The tiny little church was built on top of this high mound, a place like many other St. Michael churches was built upon. Here the church was trying to convert pagans and stories began to be told of the miracles performed by St Michael. Usually, St Michael churches, have fantastic energetic qualities.

But this church was not fortunate enough to be built over the correct energetical spot.

The St. Michael point of golden energy is actually located outside the church! The priest who designed and built it missed the mark and in doing so, built a disappointing church, lacking the high vibration and healing qualities that one associates with this type of church. 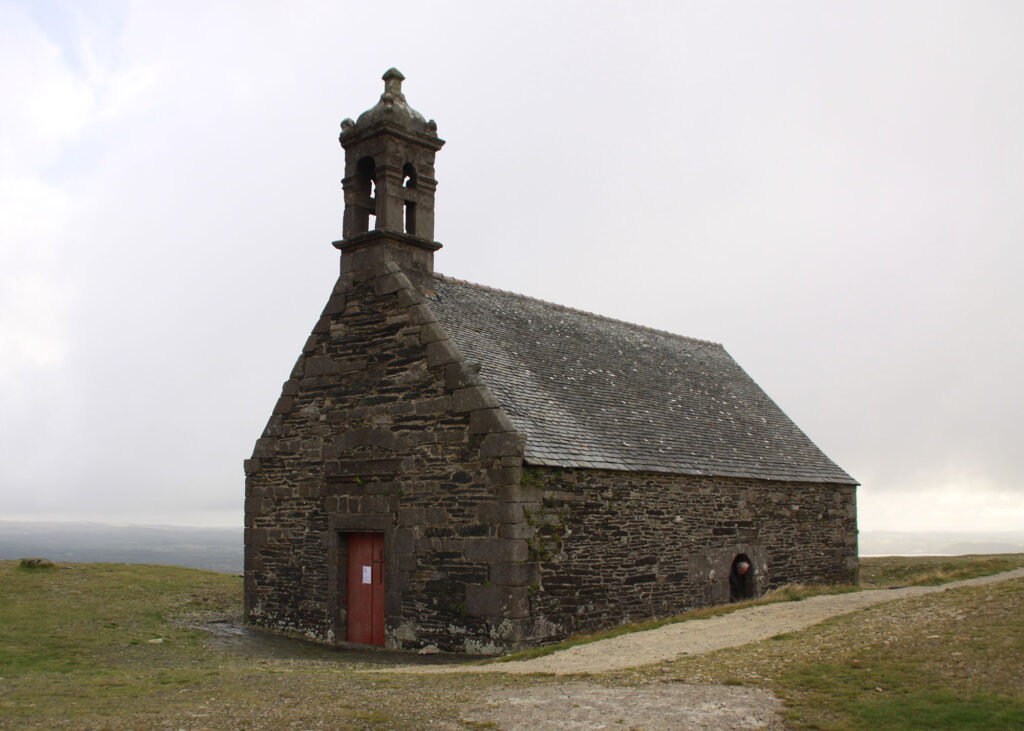 Fortunately, most of the Master Builders were trained well and knew their job.

Subterranean water veins were traditionally used to build churches and most of the time you will find a big water vein running the length of the church. Because the altar sets the tone for the entire church, this critical point needed a crossing of several good quality (high vibration) water veins. The better and more miraculous the water, the better for the energy of the cathedral. Many times, the Master Builder did not have to do much work to find a good place, because he would position the church and altar over a Roman Temple or a menhir, dolmen, or cromlech. It was a very common technique used by many cultures around the world. There is a good example of this in Santa Fe, NM. The altar of the Church of St Miguel was built over a kiva and you can see it through the clear plexiglass that now covers it.

In a simple idealized cruciform church, you would find a big water vein running the length of the church, a water vein crossing it at the transept, and then one or more water crossings at the apse as you can see in the drawing. Armed with this basic knowledge, you can see that there would be a couple powerful energetic points created by these water crossings inside the church.

As a reminder, energy vortexes are created at the crossing of subterranean water veins.

They are seen as tornado-shaped and have colors and qualities relating to our chakra system. For example, the altar crossing of earth energies would usually have a big and powerful vortex of energy and the inside ambiance of the church would be connected to the color and qualities of it. In a church dedicated to Mary, for example, the ambiance is usually green, opens the heart chakra, and at the altar a big green vortex is normally present.

In our example of St Jean de Pied Port, we can see that the earth energies are pretty standard for building a church. There is a water vein that runs the length of the church. At the altar, there is a crossing of water veins and faults. The violet vortex is located at the crossing and helps to imbue the church with high vibration energy. As you will see, the spiritual qualities of this crown-opening vortex were further enhanced by the use of the solar geometry employed in the design of the church by the Master Builder. 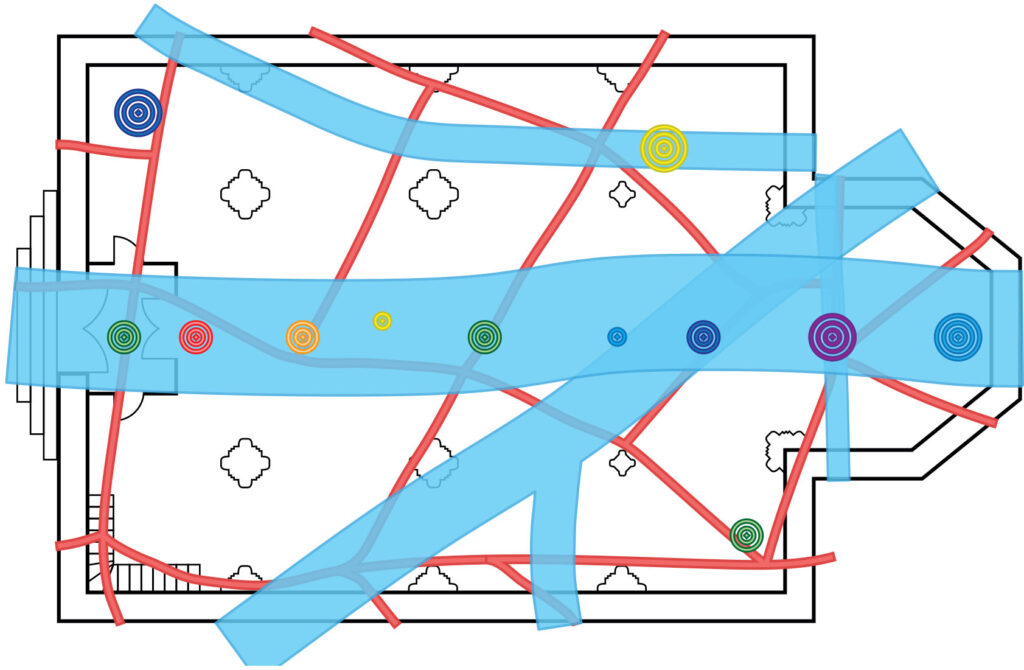 After the altar point was chosen, a connection to the sun was made.

Geometry connected to the sun is the time-honored way to build all sacred structures around the world, and churches were not the exception. As some of you are aware, churches are oriented with the apse in the east. But there are more connections to the sun besides this east/west orientation. Solstices are very important times of the year in which the sun reverses in its direction of travel. If you track the sun’s travels on the earth, you will notice a rectangular form taking shape. We call this form, the solsticial quadrilateral, or the solar rectangle. It was used as the basic form to build churches and cathedrals.

Churches can be just a simple solar rectangle or as complicated as a cathedral with their many different layers of different types of solsticial quadrilaterals. Jerusalem, Rome, Ephesus solsticial quadrilaterals were employed as a way to connect the church to these powerful places.  Dynamic rectangles connected to the golden mean could be used, as well as, solar rectangles connected to musical notes and chakras.

For our example of St Jean de Pied Port, our Master Builder combined several of these different types of solar rectangles in his design.

Let’s break it down. First, he used the solsticial quadrilateral oriented in the north-south directions. This type of solar rectangle is called the Lunar Quadrilateral or the Spiritual Quadrilateral. Side by side, two of these rectangles create the inner length and width of the nave. The side of the quadrilaterals relates to the 3rd and 7th chakras, mixing the emotion of the 3rd with the connection to the spirituality of the 7th. It helps to refine the energy and ambiance of the church. The interior also is connected to the 3 x 4 rectangle, a famous static rectangle used in building structures since the Neolithic times. It brings an element of calm and peace to the structure. The external measurement chosen by the Master Builder encloses the church with a golden rectangle adding the connection to life inherent in this figure. 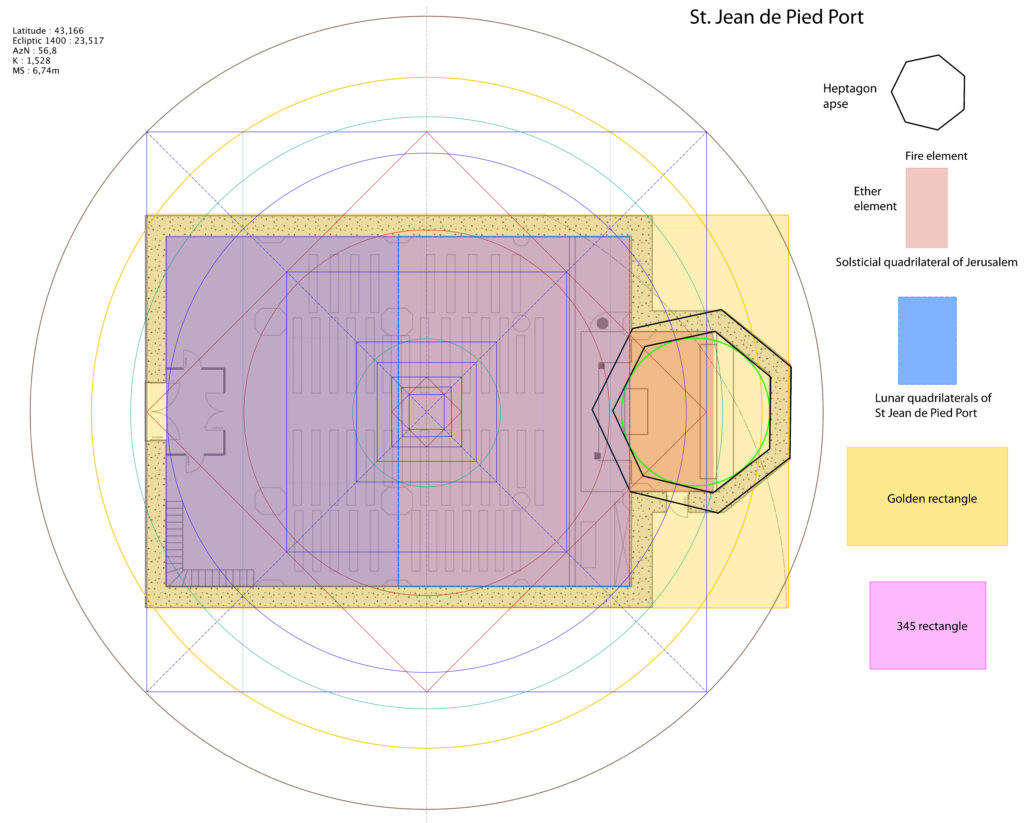 At first glance, the apse seems to be an octagon figure, but the apse angles fit perfectly into a heptagon shape instead. The sides relate to the musical note associated with the 3rd eye. Another characteristic of the apse is that the circle of ether (of the 3rd enclosure) fits exactly inside this polygon of seven. The 3rd duplication of the mandala is connected to sacred space and the ether element to the opening of the heart chakra. The use of the 3rd enclosure here emphasizes the sacredness of the space.

The Master Builder also used the ratio of the latitude of Jerusalem to fit a solar rectangle in the front part of the apse, connecting the church to the Christ energy.  He also used the elements of fire and ether, actively bringing in qualities of love and tenderness. Overall, the Master Builder of St Jean Pied Port does a good job utilizing the earth energies of the place. The church was positioned well, taking advantage of the violet vortex for the altar area. He employed solar geometry to create an ambiance of spirituality and the most sacred place, the apse, hit the mark as a place to connect to the divine. One interesting side note is that in modern times, the position of the altar has been moved off of the violet vortex and the center of the solsticial quadrilateral of Jerusalem. Leading one to the conclusion that the knowledge of this point’s power and connection to the divine, has sadly been lost.

For more information about Earth Energies and vortexes of energies, check out our blog categories. We also share some great information during our free Energetic Geometry Live! webinars and you can sign up for the replays as well as be notified for the next one at https://energeticgeometry.com/live/